A little story I wrote about a friend a while ago . . . 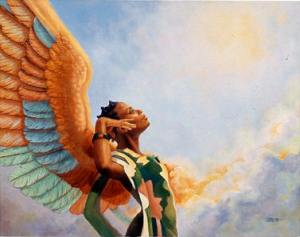 A boy went to a garden party. While he was there, he ran into a woman he’d met before. The woman stared at him but never spoke.  She saw him when he walked through the door and her eyes got stuck. She did not know him, but he didn’t seem to be a stranger either. She absorbed the colors of his clothes; she studied every curve and line of his face. She looked at the way his hair laid on his forehead, around his ears, and at the nape of his neck. She could probably replicate the haircut on herself if she tried. She followed him, both with her eyes and with her feet, as he moved past the big flowerpot in the foyer, through the kitchen, and into the dining room. He seemed to be moving too fast for her to catch every detail of him, but by the time he put down the bottle of wine in his hand, she had him completely memorized.

He wore a dark suit – probably too hot for June’s sun. But he wore loafers with no socks, his shirt was not completely buttoned, and he didn’t wear a tie. He had a gold watch on his right wrist and a gold bracelet on the left. He chose to wear an earring in his left ear. She liked jewelry on a man and smiled when she looked down at the twenty gold bracelets lining her arms and the three slender chains around her neck. She liked jewelry on anyone. No one else noticed the orange earpiece of the boy’s glasses, which sat behind the earring but she did. His favorite color she suspected. The glasses didn’t add any years to his young face, but they added a solemnness that most people mistook for age. He was still just a boy.

He made his way out to the garden. It was a garden party after all. She followed him. His stride was deliberate and purposeful, but he seemed to be completely relaxed. He thought of himself as confident. She thought he looked pretentious. She was behind him when he greeted the host of the party – a girl with fluffy hair that had been pulled up into a big, fluffy pile on the top of her head. The fluffy haired girl smiled and reached out her arms to the boy when she saw him. He reached back and overwhelmed the girl with his mass. He was in shape for sure but not big. Bigger than the girl though and she took a step back to steady herself when he hugged her. She reciprocated the intensity of the embrace once she got her balance. They were clearly happy to see one another, and the woman’s face flushed with jealousy at the sight. “Who is this girl?”

The woman positioned herself throughout the party so that the boy’s face was always in her direct line of sight. She watched him laugh and drink and eat. She thought he had had enough of the wine he brought. She frowned when he poured another glass. She watched him flirt with the girls there and peered at them when they issued playful jabs and taps on his broad shoulders. The woman spoke to no one else at the party. She wasn’t interested in the other guests. Her only interest was he. This boy. Who reminded her of no one in particular but someone she had once known.

Keeping the boy in her sight was easy to do until he moved to the dance floor. She panicked. How could she see his face when he wiggled and turned and dipped and spun in between the fluffy haired girl and the short girl and the other guy he would high five every now and then? She decided she would dance too. She floated to the dance floor and mixed in with the crowd. There were lots of young people, she thought. No one her age. She danced so much that she almost forgot her newest obsession – the boy. She got lost in an old song and an old feeling that made her close her eyes and lean her head back. Someone used to like this song. Who was it? She had forgotten. It played and she rocked. She rocked and it played. Then it ended and she remembered. The boy. She stopped instantly and opened her eyes to search for him. She was almost overcome with a feeling of loss until she bumped right into him. She looked at him and wanted to apologize, but the words caught in her throat. He looked at her and smiled. Then he walked away. She reached out to him and almost followed him, but she couldn’t. She just watched him walk away.

And so then she did too. She walked away. It was time for her to go home. She drifted up the grassy lawn and felt the fatigue of an old woman. She wandered back into the house through the dining room, into the kitchen, and then the foyer. She felt heavy and melancholy. She stopped by the big flowerpot in the foyer before heading out the door.

The boy came into the foyer. He stood beside the big flowerpot too. She looked at him, and he stared right back at her.

The boy spoke to her. “Thanks for being here, mom. It’s been too long. I’ve missed you.”

And then he walked away before she could respond.

She ascended back to heaven with renewed energy. It was a good party.